Challenges Due to App Complexity

Both iOS and Android offer opinionated ways to implement localization. iOS supports exporting localizations for translation, while Android builds on top of resource strings. The tooling is slightly different, but the concept is similar. To localize your app and define the strings, you want to localize and ship the localized strings as a separate resource in the binary. Still, with large apps and many locales, you quickly run into challenges with this workflow.

Deciding what to localize in the app versus doing so on the backend is one of the first challenges any growing app will face. By using the “default” iOS and Android localization approach, resources you localize within the app will be “stuck” with the binary: you cannot change phrases or update mistakes. If you implement serving localized strings from a vendor solution, or your backend, you have more flexibility in this regard and you only need to do one localization pass for both iOS and Android.

The topic of how “smart” the mobile app should be and what strings should live here, versus just getting them from the backend, runs deeper. We will go into more detail in Part 3: Backend-driven mobile apps. The more localization the backend does, the better. Backend-heavy localization keeps client-side logic low and reduces the number of resources for localization on mobile. While delegating more localization to the backend usually needs work, both on the iOS and Android app workflows, it leads to easier maintainability in the long run.

When supporting a large number of locales, you need to ensure that all localization translations are complete before shipping to the app store. You might be using third-party localization services or an in-house team to do so. Assuming you have a build train, you want to allow the train to proceed only after all new resources have been localized.

At Uber, we used an in-house localization tool across iOS, Android, backend, and web. This tool was integrated to generate iOS and Android resources and to track the completeness of localization. Was it overkill to build a dedicated tool just for localization? For Uber’s sophisticated use cases years back, I do not think so. Back then, there were few to no good localization tools across all stacks.

The space has changed since, though, and there are many localization vendors in the mobile space. Before building your own, it is worth seeing if you can find one that fits your needs.

Localized custom fonts is a frequently overlooked area. It is common for larger companies and those with strong brand identities to use custom fonts. However, this custom font does not always support every glyph for an app’s supported set of languages.

It is tricky enough to confirm which languages and characters your custom font is missing support for. This is even more of an issue when using these fonts to display user-generated content, as you do not have control over this input. Once you have figured out your use cases and edge cases, you either need to have this support added or — more frequently, — use a different font for unsupported locales. It gets even more difficult to manage a consistent, cross-platform mapping of fonts and languages, based on which languages each font supports.

When using custom fonts, you need to include these in the binary, adding to the app’s size. We will discuss app size in more detail in Part 5 of the book.

Currencies formatted differently on iOS and Android on certain locales is another pain point that multi-language, multi-platform apps displaying monetary values encounter. Web has a similar problem with the inconsistency; Indian rupee values are a good example of this. The problem is especially pronounced when using currency types to add or subtract values. A possible workaround is for the backend to format all currency data to the locale, and the client not doing any math operations, or formatting currency strings.

Date and time formatting will have similar challenges to currencies. Different countries and regions will display dates and times in various ways. You need to make sure the app accounts for this.

Supporting right-to-left (RTL) languages can often go beyond just translations. Most people reading this book will either be used to LTR and Latin-based languages or speak it fluently enough. However, when designing UIs for RTL languages like Arabic, Hebrew, and others, it is not just strings that need to be mirrored; the layout of the app might need to be changed. “Mirroring” the layout is a common approach, but it might result in strange UIs for native speakers and users. It is best to have locals involved in this process, both for development and for testing.

Unique locales are always worth additional attention. In my experience, Japanese and German are locales are worthy of even more checks because they can both be more verbose than English, and you want to make sure the layouts, paddings, and line breaks still work for these locales. 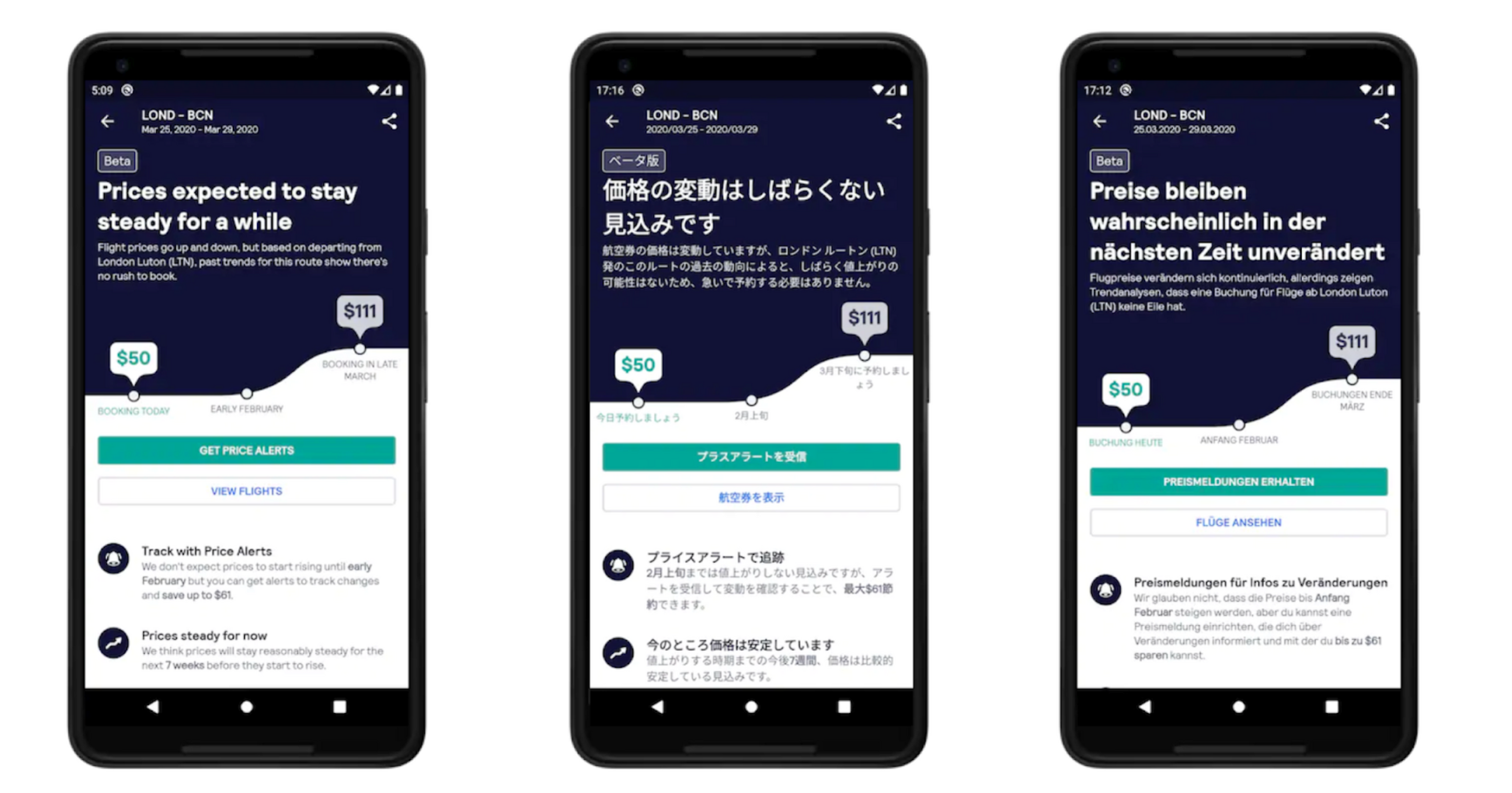 The Skyscanner app with English, Japanese and German languages. German is often a good choice to stress test the app, as the language is more verbose.

Testing localization is no small effort. In an ideal world, a native speaker would go through every flow of your app after each localization change. In reality, this rarely happens because it is too expensive to do. Most large companies rely on beta testers using the app with different locales to report glaring inconsistencies. For example, at Uber, we could rely on this method to spot localization issues early. Thousands of Uber employees dogfooded the app every week, alongside beta testers. Localization issues almost always got caught before the app got pushed to the app store.

You might need to define a workflow to validate localization changes. What should happen when a localized string changes in the app? Should this trigger an action to manually inspect the change? Should developers for the screen be notified? Should the release manager ship a new version of the app, even if there are no other changes? These might seem like minor questions. They are not. They are especially not when people translating strings work independently to engineers writing the code. Someone needs to define a workflow of not just adding, but updating and testing localization.

Snapshot testing is an underrated testing tool for localization. With snapshot tests, you can quickly and easily generate snapshots for screens in any locale, or even with pseudo-localization. Engineers can then spot layout issues much faster, and have reference images showcasing the issues. On top of helping engineers, you can share the snapshot test screenshots with people doing the translation, so they get additional context on how the translated text will appear.

Pseudo-localization is a smart way to test localization working, without going through the localization exercise. It means replacing all localizable elements with a pseudo-language that is readable by developers, but which contains most of the “tricky” elements of other languages, such as special characters or longer strings.

For example, a pseudo-localized version of “Find Help” could appear as “[ƒîîîกี้ðððð Ĥéééééļþ]. Microsoft used this approach while developing Windows Vista and Netflix uses this approach for their product development cycle. Shopify built a ruby tool to generate strings like this, and you can find an npm package that was inspired by the approach at Netflix.

Phrases that should not be localized are one final edge case. At Uber, we decided not to localize certain brand terms like Uber Cash or Uber Wallet. Some teams were not aware of this request and went ahead and translated the strings in certain screens, meaning the owning teams had to test on all locales to find these issues. Several testers also reported the lack of these translations on a regular basis. This was a bit of noise we had to manage. There are plenty of vendors who can help with mobile localization. Localization is rarely done in isolation only on iOS and Android; it is more commonly done as a whole, including the web, emails and other customer-facing properties. Localization vendors include POEditor, Loco, Transifex, Crowdin, Phrase, Lokalise, OneSky, Wordbee, Text United, and several others.